This Week In Room 2

This week in science, we had a go at the moving colours experiment. This is a great experiment for kids to learn about chemical reactions.


This experiment is really fun, easy and simple to set up at home with everyday items from around the house.

Begin by pouring milk into a bowl or plate. You will need to ensure you have enough milk to cover the base of the plate. Add a few drops of food colouring to the milk, we used 3 drops each four different colours .

Carefully dip your cotton bud into a drop or 2 of dishwashing liquid and place the dipped end of the bud into the middle of the milk. Quickly a chemical reaction will occur, we will see the colours begin to spread away from the dishwashing liquid drop and split in two.

Next, you can slowly stir around the outside of the bowl or plate and watch the magic happen!

Some groups decided to go a step further and add extra dishwashing liquid to the milk to see what would happen after the initial reaction. We had some great results!

What is the science behind it?

The dish soap does not mix with the milk. Instead it floats on top and spreads over the surface. As it spreads, it grabs the food colouring. Soap is a "degreaser" so the molecules in it are attacking the fat in the milk, causing motion which creates the swirling of the colours.

You can check out more on this experiment here: https://www.stevespanglerscience.com/lab/experiments/milk-color-explosion/ 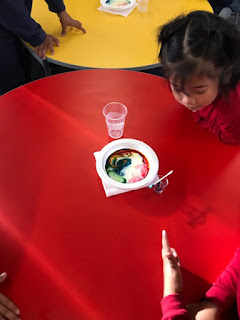 Comment down below if you have tried this at home! We would love to hear from you.

RAINBOW IN A BOWL - Another colourful experiment!
Thursday 22nd June 2017

Today we did the "Rainbow in a bowl" experiment. The children had a lot of fun doing this activity. Another simple experiment you can try at home using everyday items.